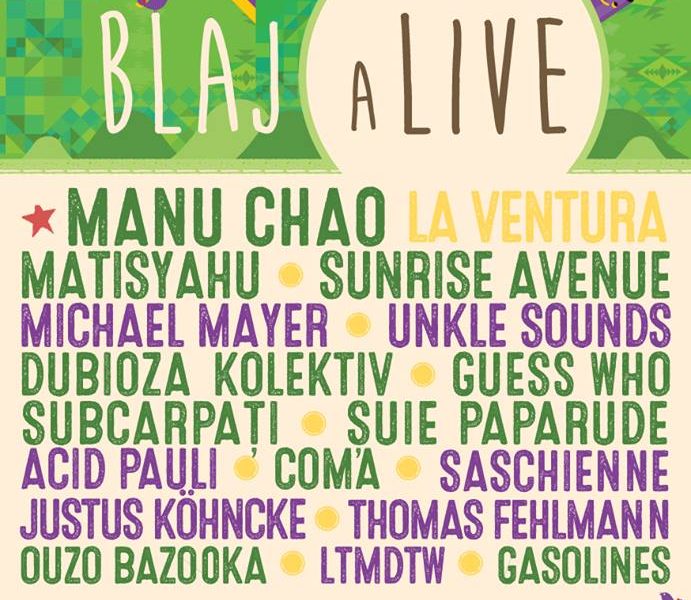 Manu Chao is confirmed to perform on Freedom Stage at Blaj aLive, Saturday, 6th of June, as the headliner for the second day of the festival. Manu Chao is completing the best line-up of the festival so far, on the same bill with Matisyahu, Subcarpați, Sunrise Avenue, Unkle Sounds and many other beautiful acts, uniting the people on the Liberty Field.

Renowned for his social commitment, his creative cosmopolitanism and his militancy on popular songs, Manu Chao is one of the most influential musicians in recent history, with an acclaimed live performance on five continents. Manu Chao finds inspiration in street culture and local scenes from different countries and nationalities. Me gustas tu, Welcome to Tijuana, Je ne t’aime plus, Bongo bong, his multicultural and multilingual music is a cocktail of rock, reggae, punk, ska, found sounds and rhythms from around the planet, singing in English, Spanish, French, Italian and few other languages, sometimes mixing them in the same song.

Manu Chao had been a well-known member of the Parisian alternative music scene, in bands such as Hot Pants and Los Carayos. Chao released his first solo album “Clandestino” in 1998, and the album became an international resounding success. His second album, in collaboration with Radio Bemba Sound System, “Próxima Estación: Esperanza”, was released in 2001, and it was again an instant hit. Then came “Sibérie m’était Contéee”, the first French-language-only album, and “La Radiolina”. In recent years, several hundred of thousands of people around the world enjoyed Manu Chao La Ventura’s energetic live performance.

The King of the Bongo is an inspiring artist, creative and committed, accompanied by La Ventura, meaning Madjid on guitar, Philippe Teboul on drums and Gambeat on bass, as on previous projects such as Radio Bemba or Mano Negra. Prepare to sing and dance at Blaj aLive with Manu Chao La Ventura performing most legendary, well known songs, as well as new ones, never recorded.