Deine Lakaien performing at the Brukenthal Museum during ARTmania Festival

The musical poetry of the Darkwave icons: Deine Lakaien

ARTmania Festival is honored to announce the performance of the German duo Deine Lakaien, great representatives of the avant garde of electronic music, that will arrive to Sibiu for an acoustic concert hosted by the Brukenthal National Museum on Thursday, 8th of August. The event proves to draw the perfect passage to the rock and symphonic metal acts that will take place in the Large Square of the medieval city during the weekend.

After a voyage of more than twenty years, Deine Lakaien proves to be the most successful and noble appearance on the dark-wave scene, still exploring the complexity of sounds and lyricism.
When the band started in 1985, singer Alexander Veljanov and keyboard player Ernst Horn were opening the way by approaching electronic music from a more gothic perspective.

In 2007, the German duo released “20 Years of Electronic Avantgarde”, a multimedia pack containing a double audio CD plus double DVD, celebrating two decades of extraordinary musical activity. The anniversary was celebrated also through an exceptional acoustic tour alongside the Neue Philarmonie Frankfurt orchestra.

“Older, wiser, but still we are these fighters” (one line from Deine Lakaien’s song “Along Our Road”) synthesizes the message of their last studio album “Indicator” (2010), outstanding as one of the most exciting album of their entire career. This discographic material clearly depicts a new phase of the band`s existence: Deine Lakaien destroy any cliché and invite a broader range of listeners to their artistic world, by trying out “new themes and creative paths” (Ernst Horn).

With “Indicator” they prove to maintain their original focus on electronic instruments, but stand out for the amazing stylistic diversity and natural playfulness they derive from it. The German duo tends now to come closer to its audience. They have a simple poetic approach, highly emotional, but free of heavy metaphors and overwhelming pathos. Unlike their earlier albums, the new songs have a “a poetic and political immediacy never before present in our work to this extent”, confessed A. Veljanov.

Several years of artistic creation and extraordinary performances around the world, unleash a more powerful Deine Lakaien that sings about controversial political issues, about immigration, European unity, war, powerlessness of everyday people and responsibility for the future, but also about the theme of all themes: love.

“To sing of love is the most difficult thing of all, for any singer”, claims Veljanov. ” It’s a theme that will never cease to preoccupy me but today, I’ve found my own way of transporting it, with my voice and in my own words”. www.deine-lakaien.com

Deine Lakaien is coming to the ARTmania Festival with an intense performance, full of emotions, on the 8th of August. Acces to this event will be granted on the basis of the festival full pass or a festival ticket for one day, only with reservation made in advance below:

Follow up on www.artmaniafestival.ro for the latest news. ARTmania Festival is co-financed by the local Council of Sibiu through the Town Hall and the Cultural House of Sibiu Municipality. 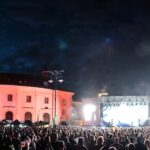