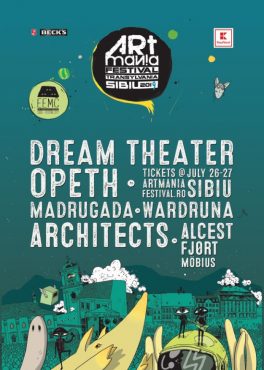 Dream Theater, Opeth, ARCHITECTS, Madrugada, Wardruna, Alcest, Myrkur, Fjort and Mobius are the artists confirmed for the 14th edition of ARTmania Festival, that will take place in July 26-27, 2019, in the Large Square of the medieval citadel of Sibiu.

Dream Theater was founded in 1985, around Petrucci, Myung and Portnoy. At that point, they were all students at the Berklee College of Music, and the band was named „Majesty”. After 33 years, two Grammy nominations and 15 million albums sold, the group considers itself completely mature creatively and promises a monumental album, in which, with today’s impressive virtuosity, the band goes back to its origins, reviving the heavy part, as well as the proggy one. Everything, as Petrucci says, for a music played with super excitement.

Alongside thousands of completely fascinated fans, Dream Theater has another reason for a strong bond with Romania: their first concert here, in Bucharest, in 20112, was recorded and released as an „official bootleg” in the band’s discography.

Those who will see them live in the Large Square in Sibiu might actually enjoy some songs from the classic Metropolis II: Scenes from Memory, their 1999 album, which the band will play in its entirety (at least, in the first part of the tour, which will only include shows „an evening with”) as to mark its 20 year anniversary.

Opeth, one of the best-known names in the international music industry returns to the ARTmania Festival scene 10 years from their first performance in Romania and on the Large Square stage.  The Swedish band that redefined a whole genre, demolished musical conventions and never stopped surprising its fans, has been founded in one of the Stockholm suburbs by Mikael Åkerfeldt in 1990. With 12 albums released so far, intense, varied and stylistically rich, Opeth is one of the best musical projects in the world, whether we are considering its live shows or its albums.

The Norwegians from Madrugada are the main actors of a double premiere: for the first time in Romania and reunited for the first time in ten years, the band choosing ARTmania Festival as part of their comeback tour. This European tour de force marks ten years from the launch of their legendary debut album “Industrial Silence”, reason why three of the original four artists will go onstage: Sivert Høyem, Frode Jacobsen and Jon Lauvland Pettersen. Madrugada, which means blue hour in Portuguese and Spanish (the gray-blue period that precedes sunrise) was formed in 1993 in the Norwegian town of Stokmarknes.

ARCHITECTS, the well-known British metalcore band, will also play at ARTmania Festival 2019. The group was founded in 2004, in Brighton, UK, by twin brothers Dan & Tom Searle and has been awarded titles like Best British Live Bands, while their songs have been described as „complex and impressively crafted hymns” by the British newspaper The Guardian.

Wardruna, familiar to the Romanian public thanks to the Vikings series, is a Norwegian neo/dark folk band that explores the depths and mysticism of Nordic traditional culture, reinterpreted in a contemporary style, with strong mysterious accents. Established in 2003 by Einar Kvitrafn Selvik, the band impressed fans of neofolk with their hypnotic debut album, „gap var Ginnunga”, first of the “Runaljod” trilogy, which lies under the sign of the 24 runes.  Each of the recordings included on all three albums was done in the outdoors, in places or circumstances relevant for each of the 24 runes. At the 14th edition of ARTmania Festival, Wardruna will entertain its fanes with songs from their last album, “Skald” which will be released at the end of November 2018. “Skald” promises its listeners a lot of surprises, carrying them in a new musical adventure outside the rich sound landscape which made Warduna famous. The new approach, direct, but as intense, will submerge the travelers in a mystical conjunction of poetry, voice, antique sounds of traditional instruments.

Alcest will bring music from another world on the ARTmania Festival stage, taking place during 26- 27 July, 2019, in the Large Square of the medieval citadel of Sibiu. Founded in 2000 by Neige (Stéphane Paut), Alcest started off as a solo black metal project, but ended up founding a while new musical subgenre, blackgaze, that features elements from black metal music and shoegaze, with a truly unique sound.

Myrkur: „Folkesange” – the artist returns to Romania with a special concert that is part of the acoustic tour (named Folkesange). During this tour, alongside a group of young players and a female choir, the artist will sing songs from the Norse folklore and own reinterpreted compositions in an acoustic version, both song types being included in her latest album, “Mareridt”. Myrkur, translated as darkness in Icelandic, is the blak metal project and alter ego of Danish artist and model Amalie Bruun. Born out of Scandinavian darness, Myrkur combines the brutal intensity of masculine energy with black metal sounds and musicality of feminine voices, sometimes sophisticated and delicate.

FJØRT and MÖBIUS are the two new names that complete the ARTmania Festival 2019 line-up that will take place in the Large Square of the medieval citadel of Sibiu.

The history of the post-hardcore band Fjørt began in Aachen in 2012. Just after the release of their first EP, under the Through Love Records umbrella, the band began gaining traction on the local scene. Their creative effervescence continued to animate the band and shortly, they released three more new albums with positive reviews.

The mantra that animates the Slovak duo Möbius is one that encompasses in just a few words the reality of our contemporary society: words are useless and silence is inconsolably empty. In spite of all appearances, there is a link between the band’s name and topology. The name Möbius is directly inspired by the founder of topology, Ferdinand Möbius. This mathematical discipline, concerned with objects in space with special qualities, fittingly captures the essence of the duo’s music. Similar to the science that has inspired them, Möbius cover a large specter of frequencies, flirting in their musical journeys with influences from stoner rock or sludge metal, a sub-genre of heavy metal music that combines elements of doom metal and hardcore punk, with the odd grunge and noise rock influences.

Passes for the 2019 edition of ARTmania Festival are already available on the official website, www.artmaniafestival.ro, the first 1,000 passes having the special price of 190lei each, available until 30 November 2018 the latest.