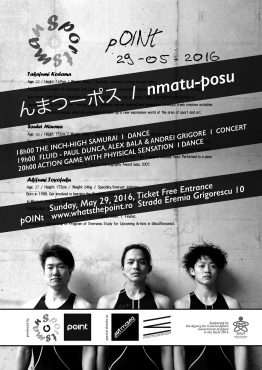 When the Nintendo Entertainment System (NES), so called the Famicom, hit the market in 1980s, their game’s virtual reality won the hearts and minds of young people. A few years later, low-tech toys calling for „interactive action” were released. The physical experiences of playing these hands-on toys instantly captivated the young people, who were preoccupied with the virtual world of the NES games before. One of the toy’s name is „Actual Fight Boxing Game” – KENTOSHI / 拳闘士.

The dance-unit “nmatu-posu” founded in 2006 has been active in Japan and abroad. The members of nmatu-posu come from the athlete background, having teacher license for elementary school, junior-high school and high school in Japan.
They are exploring the boundary between SPORT, ART and EDUCATION, and produce various works with a combination of them. There is an unique dance program called „Creative Dance” which has been developed in school physical education in Japan. They are a leading organization in Creative Dance, moreover, have named it as Contemporary Artistic Physical Education under the context of Diversity of Contemporary Dance. They attempt to display a concept of Physical education in art spaces, in other words, to introduce their thought of developing body.

Untouched till now by the public eye, in a fragile immaculate state , FLUID is a musical triangle born in 2016.

Paul Dunca, Alex Bălă and Andrei Grigore – initiators of this conjunction – perform together for the first time revealing a sound at the border between electronic and oriental music.